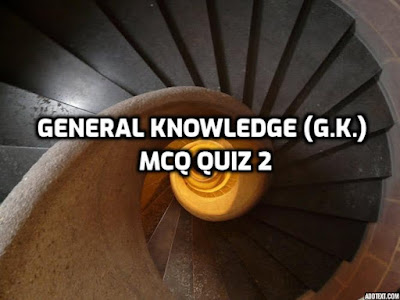 It also helps to preparation on online MCQ based exam like competitive exams and others university or college exams, NET exam , SET exam and other entrance exams.

We are publishing a General Knowledge Quiz series/ G.K.quiz series for practicing your study.

You can translate a quiz into your understandable language with the help of Translate button which shown at the right side of post.

This General Knowledge MCQ Quiz 2 Free MCQ  is based on following questions.

1. Who among the following persons was considered by Gandhiji as his ‘Political Guru’?

2. Panini, the first Grammarian of Sanskrit language in India, lived during the-

A. 2nd Century BC

3. The oldest form of composition of the Hindustani Vocal Music is-

4. For which movement the slogan ’Do or Die’ was given by Mahatama Gandhi?

5. Who was the first British to get a farman from the Mughal Euperor Jahangir to establish a factory at Surat in 1613?

6. Who among the following wrote commentaries on Harshavardhana’s administration and the court life in Kannauj?

7. Which state was the first victim of “The Subsidiary Alliance System”?

8. Who built the Taragarh fort of Ajmer?

9. Which one of the following is not correctly matched?

10. Who among the following woman social reformers was called ‘Pandit’?

11. Where was the seat of the first Republic of the world in 6th century BC?

12. In which year the first English translation of Arthashastra was published?

13. The weekly Commonweal was founded by

B. Mahmud of Ghazni

15. The resolution of Quit India Movement was passed in which of the following city?

16. Who among the following said “patriotism is religion and religion is love for India”?

18. Who was the last great ruler of Gupta dynasty?

D. None Of these

19. Who among the following was not a member of the Cabinet Mission?

20. Who started the Indian Reforms Association?

21. Which one of the following was the most immediate problem India confronted after independence?

A. Settlement of boundaries after partition

B. Division of Civil Service personnel

22. The censorship of the Press Act was passed in

23. Where did Mahatma Gautam Buddha delivered his first sermon?

24. Sarga, Pratisavge, Vansa, Manvantara and Vanshanucharit are the indicators of-

25. When was the ’Quit India Movement’ Launched by Mohandas Karamchand Gandhi?

26. Which among the following was the great centre of trade and commerce in India in the Gupta period?

27. The Indian National Congress became a real mass based political party after the

A. The Indian National Congress became a real mass based political party after the

B. NagpurSession of the Congress in 1920.

28. Which of the following was a recommendation of Hunter’s Commission?

B. New regulation for the organized senates system

D. Introduction of civic education at college and university level

29. Who among the following was known as the “Saint of the Gutters”?

30. Krishnadevaraya of the Vijaya nagar empire was a contemporary of –

32. Who among the following, after marriage, became known as Nur Jahan, wife of Emperor Jahangir?

33. Which of the doctrines of Jainism was added by Mahavira?

C. Do not commit violence.

35. The famous dialogue between Nachiketa and Yama is mentioned

36. Who brought 02 Ashokan Pillars from Topra(Ambala) and Meerut to Delhi?

37. The Lakhu cave having ancient rock paintings is located in –

38. Which of the following places is considered a Jain Siddha Kshetra on account of its association with Parsvantha?

40. The main focus of the Rigvedic culture was

B. Punjab and Delhi region

D. Region between the Swat and the

42. Which of the following is not one of the causes responsible for the rise of moneylenders in British India?

43. The tendency for increased litigation, was visible after the introduction of the land settlement system of Lord Cornwallis in 1793. The reason for this is normally traced to which of the following pro

A. Making East India Company an overlord of Zamindars

44. There was a sharp class division at Harappa and Mohen-jodaro. This is clear from the

B. religious beliefs of the Harappans

C. tools and implements used by the Harappans

45. The most learned medieval Muslim ruler who was well versed in various branches of learning including astronomy, mathematics and medicine was

46. Which Indus Valley Civilization site would you associate with the bronze statue of ’Dancing Girl’?

47. A prominent Harappan site, being surrounded by flood barriers in order to protect it with the aid of UNESCO funds, is

48. Which foreign journalist reported about the British brutality perpetrated against peaceful Satyagrahis at Dharasana Salt Depot during the Civil Disobedience Movement?

49. Who among the following was a Satavahana ruler?

50. Where did Lord Buddha breathe his last (Mahaparinirvan)?

View all posts by A.J.Bendale →